Volkswagen Polo not to be sold in India with immediate effect

Tweet
Volkswagen India, on Wednesday directed its dealers not to sell any Polo, its popular hatchback model in the market with immediate effect. In a letter addressed to its dealers, Volkswagen has directed them not to "physically deliver" any Polo vehicle. "We request, not to physically deliver any Polo vehicle (all variants) with immediate effect till further notice from VW," the dealers were told.  ET has reviewed the letter signed by two senior Volkswagen officials — Ashish Gupta, Head of After Sales-Operations and Pankaj Sharma, Head of Sales Operations. Volkswagen Passenger Cars spokesperson confirmed a temporary hold on deliveries of its carline Polo due to a technical reason which is currently under evaluation.

Volkswagen Expert Review
"This, however, concerns a limited number of cars out of a specific production period. The deliveries for the non-impacted Polo range continues as per schedule," the spokesperson, clarified in a statement later in the evening. While the company is ascertaining the exact number of vehicles affected by this particular technical snag and is likely to reveal the exact details in the coming few days and whether there is a need for a recall. 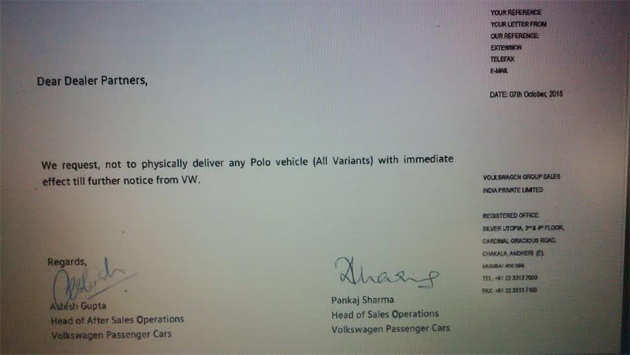 Few people in the know of the development said, the issue may be pertaining to a handbrake and it may have impacted a small lot of vehicles, probably in few hundreds, which were produced recently. VW India further clarified that it had nothing to do with the EA 189 diesel engine, which has been embroiled in the recent controversy in the US surrounding a software that was capable of cheating emission tests. Volkswagen Polo is the mainstay for the German carmakers and contributed about two-thirds of the company's sales in FY15. It sold approximately 30,000 units, during this period. The company has produced 20,030 units of Polo in India for the period between April-August 2015. Out of these, 13,827 units were sold in India and 6,052 were exported cumulatively. Closer home, Volkswagen India has been on a turnaround path, with the company posting seven consecutive months of growth (February to August), before sales declined in September. That was on account of two weeks of plant shutdown to make way for new model ICS or Indian Compact Sedan which it plans to launch in 2016. So far this calendar year, VW India has posted a growth of 12% to about 35,300 units.
Courtesy: Economic Times
Volkswagen News Volkswagen Polo News Comments (0) Write Comment 1020 Views

The 2021 Volkswagen Polo is slated to make its global debut sometime during this month. Before that, the images of the proposed model have....

Volkswagen to Upgrade Polo with ABS as....

Polo hatchback has been one of the best selling products by German car maker Volkswagen. Now according to recent reports the car maker is going to....

Good news for all Volkswagen fanatics in UK and Europe! The new and fresh R-Line variant of Volkswagen Polo has been revealed and would hit the....

Volkswagen India has amplified its Polo range with another variant, called Volkswagen Polo SR hatchback. This one is very sporty and athletic. The....

The Volkswagen Polo R Cup 2012 ended recently at the Buddh International circuit and Ameya Walavalkar won the cup with a huge margin, whereas A.....